OK, I wanted to post something since the new year started but today is probably not the right day to do so.  If you check my page entitled, My Year in Pixels, you will see that I am having a blue day.  Blue means I am out of sorts, tired, grumpy, and irritable.  And I truly don't have a good reason for being so.  Nothing bad has really happened.  The children at school have been chatty and a little loud but they have not been naughty.  Maybe I just need a snow day instead of the yucky rainy gray day with temperatures of 52 degrees.
My grandchildren are coming over tonight.  I am babysitting them until around 6:30.  Perhaps they will lift my spirits.  I truly have a lot for which to be thankful.  Too bad snow is not currently one of those things! 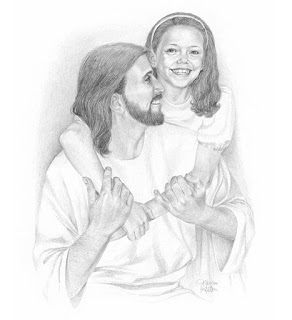 Sweet Child of mine that I am still waiting to meet, I love you.  This was your conception month.  I miss you so much and am looking forward to seeing your beautiful face one day.  Please keep Grammy and Pops company while you wait for me an,d take care of your little sister.  Tell all our family that when I get up there, I want them all to sit as close to me as possible at the Lord's table.  I have so much I want to talk about!  Until then, here is a poem I read this morning in my devotions.


My little girl went out the door;
I hugged and kisser her just once more,
Reminding her as oft before,
"Remember to say thank you."

And then the thought occurred to me,
I'd better check again to see
How long since I on bended knee
Remembered to say thank you.
An Anonymous Mother
- November 14, 2019 No comments: 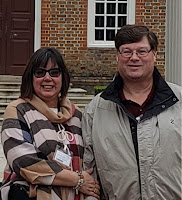 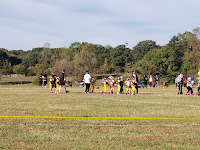 This has been a wonderfully restful weekend!  It started off with us going to Ryan's football game on Saturday.  I think his team lost - not sure; they don't play the game with the full rules of football.  Still, the boys have fun and that is all that matters!  After the game, Mark and I did our grocery shopping and prepared to have the boys over night.  Sara and Lacon won a free night at the Kirkley Hotel and needed to get away for the evening.  Mark took Ryan to the football game while I had Oliver.  Mark said that Ryan alternated between being bored out of his skull to dancing and shouting "Move those chains!"  LOL!!   I went shopping with Oliver.  Mark needed underwear.  I also got a new pair of leggings.
On Sunday Sara and Lacon were going to pick up the boys early and go to Layman's Farm to pick out their Halloween pumpkin and customs.  I am not sure if they got the pumpkin because it was pouring down rain but they did get costumes.  Ryan will be Spiderman and Oliver will be Marshall from Paw Patrol. 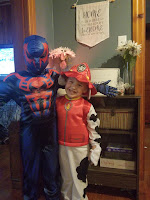 My grand-babies are ADORABLE!

Sunday night we went to a ghost tour.  I don't believe in ghosts but these tours are fun regardless.  It is said that if you take a photo with a ghost around you will see an orb in your photo.  Below are two photos I took.  One is from July 2011 and it has a HUGE orb.  The other is the same house in 2019.  No orb. 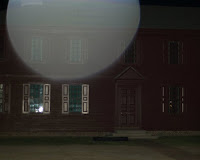 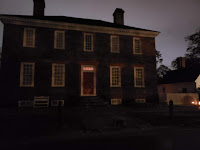 This is the Payton Randall Home.  See the orb on the left?  Anyway, it was fun and here are some more photos from the weekend: 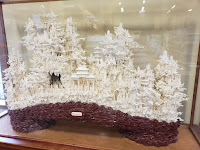 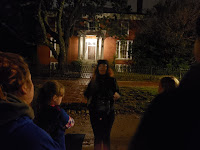 This was a display in the Pottery Outlet.  I was not impress with the outlet itself but I loved this display.  It is the Town of Bethlehem created in sand and with an Asian flare.  So pretty!

This is Cindy, our tour guide for the ghost tour.  She was really good! 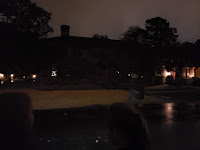 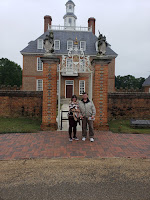 This is the big picture from the close-up above.  I got a man there to take it for me but I don't think he really wanted to do this. 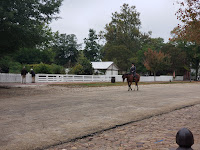 A character on horseback in Williamsburg.

These skeleton displays were up on Monday afternoon.  They were not there Monday morning.  I never did find out what they were for as they were only one one block and no where else in the town. 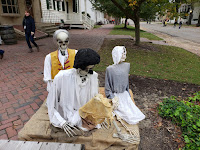 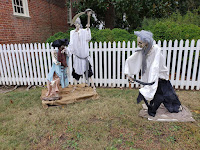 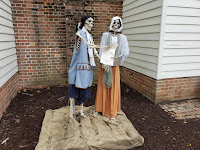 NOW!  What I am most proud of!  I have lost 15 pounds on my diet plan.  I am proud of myself for sticking with this. 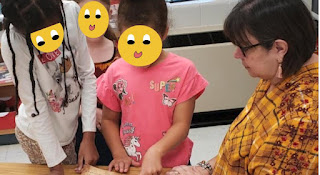 Today was a difficult day.  Well, at least I tried to make it difficult.  I started off a little grumpy because Mark and I switched  cars so that his could go into the shop.  I hate not driving my own car.   didn't have my Alexa nor did I have my music.  Plus Mark's car feels so big and feels like it can get out of control easily.

Then I had to go by the Tech Center to get the Jamestown breakout folder because I had four breakouts today.  I barely got them set up in time.  I was also a little foolish to plan the four back to back because it didn't give me much set up time in between.  However, the kids did great and really seemed to enjoy themselves.  I noticed in the picture that my top is too big.  Whodda thunk!

I ate less for dinner tonight than I usually do.  We shall see if it pays off.  I HAVE to lose this weight!!!!

After school I took the car to Ford and got them to shuttle me home.  Mark told me tonight that he asked Ford to do an oil change and inspection.  They messed up the oil change in my car.  Let's hope they do better on his!

I am not sure where my grumpy mood is coming from today.  I just feel a little overwhelmed.  BUT!  I did manage to meet my step goal with use a little more than 7500 steps today and I drank PLENTY of water.
- October 10, 2019 No comments: 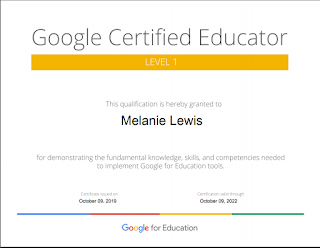 YAY!!!!!  I passed my Google Certified Educator Level 1 test today.  It seemed very easy compared to last time.  I am going to celebrate this weekend by completing my beading kit from last month.  There is a new one on the way!

I was nervous about this test since I was taking it during my fasting time.  I was scared that I would not be able to concentrate. 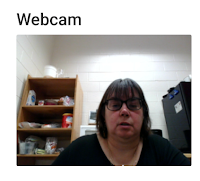 This is me during the test.  I took a screen shot of the camera they had focused on me.


After the test I came home and ate while I watched a little TV.  Then I went to my allergist appointment.  They had to schedule me with a substitute allergist as my usual one was out sick and they forgot to call me to cancel.  I waited for an hour before I got to see someone.  During the appointment I discovered that if I was allergic to the tree I was allergic to the nut as well.  No more pecans and walnuts for me.  I am devastated!!! 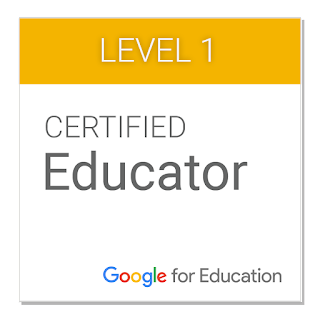 Day 2 of my diet.  I am feeling more hungry this morning and I have to adjust my schedule.  I will not get to eat until 12.  Hopefully I can make it!

I started a new diet today called the intermittent fasting diet.  Basically, I wait until 11:00 to eat breakfast, skip lunch, and eat dinner by 7:00.  After 7:00 I am not allowed to have any more food until 11:00 tomorrow morning.  I have 16 hours of fast and 8 hours of feast.  The good news is that during the 8 hours I can eat what I want to eat.  I don't have to have any special foods.  Well, here it is almost 9:00.  We shall see how this goes.
10:09--I have one hour before I can eat.  I am not feeling terribly hungry but I am feeling a little "antsy".
11:02- -I made it!  NOW, I will enjoy my breakfast.
What did I eat?  I had 4 ounces of Sunny-D Orange Juice, one 8 ounce glass of a chocolate milk breakfast shake, and an 8 ounce glass of coffee with cream/sugar.  I also ate one granola bar and 4 of those little Belvita Breakfast Cookies.
5:00-For dinner I had a double cheeseburger from Wendy's with a sweet tea.
I have drank 3-8 ounce glasses of water.  Tomorrow I will shoot for 4.
I had 8495 steps today recorded on my smart watch.  Right before bed I weighed myself.  I weigh 220.8 pounds.
- October 07, 2019 No comments:

OK, I wanted to post something since the new year started but today is probably not the right day to do so.  If you check my page en...

Hello everyone! This is my online diary. These are just the entries I have elected to share with you. Other entries are kept in draft mode to make them private. I am not a very interesting person. I am just doing this in an effort to move away from Facebook.

Where Else Can You Find Me?